“Learning from the Lightning: How Nikola Tesla Formulated a Scheme for Wireless Power in Colorado Springs” 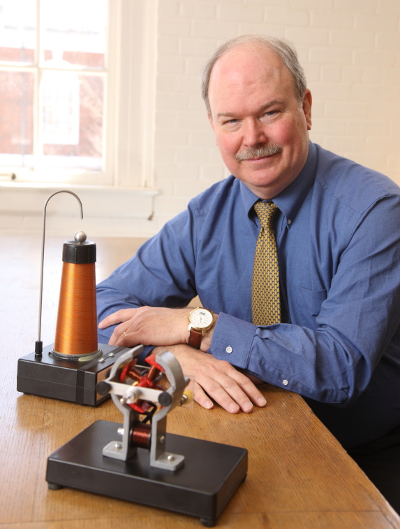 Abstract:  Nikola Tesla [1856-1943] is frequently celebrated for inventing a practical AC motor and for contributing to early radio technology through his plans to transmit power wirelessly around the world.  This lecture will trace how Tesla developed his wireless technology from 1890 to 1905, with an emphasis on what he learned in 1899 when he operated an experimental station in Colorado Springs.  Since his station was located on Colorado’s Front Range, Tesla was able to watch thunderstorms as they moved out of the Rockies and across the Great Plains and to study the ground currents generated by lightning strikes.  These observations allowed Tesla to confirm his theory of how to transmit energy through the earth’s crust but at the same time he failed to challenge or disconfirm this theory, a failure that limited his subsequent efforts to perfect his ambitious plan for wireless power.  Nonetheless, while in Colorado Tesla perfected his understanding of how to tune his transmitting and receiving circuits, thus laying the groundwork for future development of radio technology.

Biography: Bernie Carlson is the Joseph L. Vaughan Professor of Humanities and lectures in the TechInnovate program at the National University of Ireland Galway.  Bernie studied history and physics as an undergraduate at Holy Cross College, earned his Ph.D. in the history and sociology of science at the University of Pennsylvania, and did his postdoctoral work at the Harvard Business School.  He has written widely on invention and innovation as well as on the role of technology in the rise and fall of civilizations.  His books include Innovation as a Social Process: Elihu Thomson and the Rise of General Electric, 1870-1900 (Cambridge University Press, 1991) and Technology in World History, 7 volumes (Oxford University Press, 2005).  His most recent book, Tesla: Inventor of the Electrical Age. (Princeton University Press, 2013) has been translated into nine languages.  In addition to his books, Bernie has filmed 36 lectures on "Understanding the Inventions that Changed the World" for The Great Courses.  He is a regular contributor to Forbes.com, writing on innovation and the modern economy.  Bernie has been the recipient of the IEEE History Fellowship and winner of both the SHOT-IEEE History Prize and the Middleton Award in Electrical History.  With the IEEE, he has served on the advisory board of Spectrum and chaired the History Committee.